View all Burned Sports' offerings on Washington Wizards articles such as accessories, caps, hoodies, t-shirts and much more. 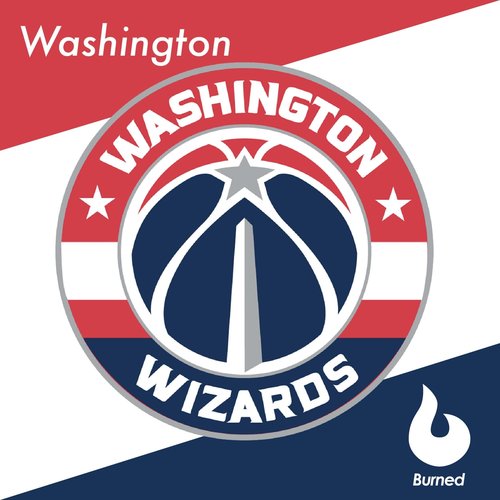 The Washington Wizards are an American professional basketball team based in Washington, DC. The Wizards compete in the National Basketball Association (NBA) as a member of the Eastern Conference Southeast Division of the league. The team plays its home games at the Capital One Arena, in Washington, DC's Chinatown neighborhood.

His aggregate numbers weren't quite as impressive as Elvin Hayes, and his score marks turned out in comparison to Walt Bellamy, Gus Johnson, Earl Monroe and many others in Washington Wizards history, but Unseld is undoubtedly the best player in franchise history. The only player to spend his entire career with the team, Unseld has remained a staunch player of the Bullets uniform since he was drafted as number 2 in 1968. He was the Bullets' second consecutive No. 2 and last year they had drafted Earl Monroe with the second overall selection. Like Monroe, Unseld won the Rookie of the Year award in his first season. Unlike Monroe and every other player in league history besides Wilt Chamberlain, Unseld also won the NBA MVP in his rookie season. Simply put, Unseld was a beast. Only three times in his NBA career, the 6'7 '' center had a higher scoring average. That he was only 6'7 '' and averaged 14 rebounds per game for his career says something about the kind of strength Unseld was.

Hayes holds more franchise records than any other player in team history, and it's easy to find out why. An incredible scorer with a great back-to-the-basket game, the Hall of Famer is number 10 of all time in points scoring with over 27,000. In addition, in his nine seasons as a Bullet, Hayes missed a total of seven games. Hayes was third in NBA history "total played in minutes" "and was nearly indestructible in his 16 NBA seasons. A critical part of the 1978 championship team, Hayes is simply one of the greatest NBA players of all time. The fact that he is not number 1 on this list is more evidence of the unique playing style of the player who claimed first place. Hayes was and is, for all its worth, the prototype for any general manager's dream NBA forward-center. The franchise has retired its number 11.

History of the Washington Wizards

The franchise was created in 1961 when the Chicago Packers based in Chicago, Illinois, and was renamed the Chicago Zephyrs the following season. In 1963, they moved to Baltimore, Maryland, becoming the Baltimore Bullets, the name recognized by an earlier team of the same name. In 1973 the team changed its name to Capital Bullets to reflect their move to the Washington metropolitan area and then to Washington Bullets in the following season. In 1997 they called themselves the Wizards. The Wizards have appeared in four NBA Finals and won in 1978. They have had a total of 28 playoff appearances, four conference titles (1971, 1975, 1978, 1979) and seven division titles (1971, 1972, 1973, 1974, 1975, 1979) , 2017). Their best season came in 1975 with a record of 60–22. Wes Unseld is the only player in franchise history to become the MVP (1969) and win the Finals MVP award (1978). The four players (Walt Bellamy, Terry Dischinger, Earl Monroe and Wes Unseld) have won the Rookie of the Year award.