View all Burned Sports' range of Brooklyn Nets items such as accessories, caps, hoodies, t-shirts and much more here. 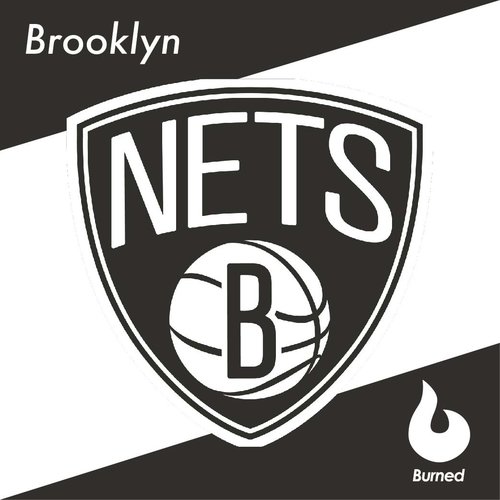 The Brooklyn Nets are an American professional basketball team based in the Brooklyn borough of New York City. The Nets compete in the National Basketball Association (NBA) as a member of the Atlantic Division of the Eastern Conference.

The team plays its home games at Barclays Center. They are one of two NBA teams based in New York City and the other is the New York Knicks. The club was founded in 1967 as a charter franchise of the NBA's rival league, the American Basketball Association (ABA). They played in New Jersey as the New Jersey Americans during their first season, before moving to Long Island, New York in 1968 and changing their name to the New York Nets. During this time, the Nets won two ABA championships (in 1974 and 1976). In 1976 the ABA merged with the NBA. In 1977, the team returned to New Jersey and played as the New Jersey Nets from 1977 to 2012. During this period, the Nets won two consecutive Eastern Conference championships, but failed to win. A league title in the summer of 2012, the team moved to Barclays Center and adopted the current geographic name.

When Jason Kidd arrived in New Jersey, the team culture changed immediately. The previous season, Stephon Marbury was the team's point guard and No. 1 scorer and the Nets finished with a record of 26-56. In 2001-02, with Kidd as the floor general, New Jersey went 52-30 and lost in the NBA Finals in four games to the Los Angeles Lakers. Unlike Dr. J, Kidd was unable to bring championships to his team, but his two trips to the finals saw the Nets drop to two teams (LA and the San Antonio Spurs) that have won nine rings since 1999. His career averages as a Net are 14.4 PPG, 7.3 RPG, 9.2 APG and 1.9 SPG. And he is first in assists (4,620), first in three-pointers (813), first in steals (950), fourth in runs scored (7,373) and fifth in rebounds (3,662). It's only fitting that the next phase of Kidd's basketball career is as the head coach of the Brooklyn Nets.

Dr. J was an elite all-round player for the Nets. In his three years with the organization in the ABA, he averaged at least 27.4 PPG, 10.7 RPG, and 5.0 APG. Erving led the Nets to two ABA titles and is ranked sixth in franchise history for runs scored with 7,104. A fair argument could be made that he would be the best player in Nets history, but just three years of playing at the club somewhat detracts from his performance, especially when the man ahead of him turned the franchise over on arrival - something Dr. did for the 76ers. Philadelphia became a contender, losing in the final in Erving's first year with the team when he and the Nets were forced to part ways.

History of the Brooklyn Nets

The Brooklyn Nets were founded in 1967 as the New Jersey Americans and previously played in Teaneck as the New Jersey Americans. In the early years the team led a nomadic existence, moving to Long Island in 1968 and playing in various arenas such as the New York Nets. Led by Hall of Famer Julius "Dr. J" Erving, the Nets won two ABA championships in New York before becoming one of four ABA teams admitted to the NBA as part of the ABA-NBA merger in 1976. Unlike the other three ABA teams that entered the NBA and played in cities without any NBA presence, the NBA's Nets had to pay a $ 4.8 million "indemnity" to the New York Knicks. The team funded that payment by selling Erving's contract to the Philadelphia 76ers; and the Nets went from winning the last ABA title in 1975-76 to the worst record in the NBA in 1976-77. The team then moved back to New Jersey in 1977 and became the New Jersey Nets. During their time in the state, the Nets played in two consecutive NBA Finals in the 2001-2002 and 2002-2003 seasons by teams led by point guard Jason Kidd. After playing for 35 seasons in New Jersey, the team moved back to New York State, changed its geographic name to Brooklyn, and began playing at the new Barclays Center, starting with the 2012-2013 NBA season.